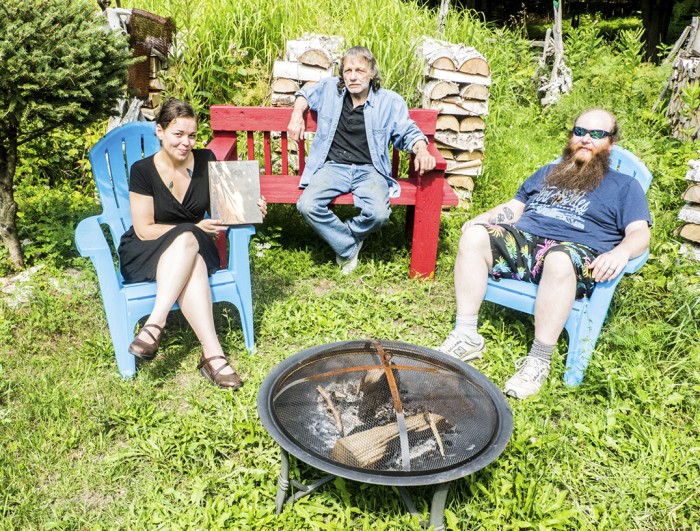 GORE BAY— Jack Whyte is as casual as they come. Dressed in well-worn denim, hair flying wild, he almost leans his chin on the table as we talk, so relaxed is he, wry smile and ironic repartee at the ready.

We’re in the artist’s rustically beautiful hand-built home in Gore Bay, tucked anonymously among the pines and cedars that obscure it from the outside world. Son Dylon and daughter-in-law Ashley sit on either side as talk moves to the collaboration they undertook together last winter. They are the producers of a 456-page large-format hardcover book entitled ‘Scrapbook: a story of art’ that Jack says was his “immunization against cabin fever” project that began last August.

This book is “how I became an artist,” says Jack, who was born in 1939. He treated the whole project as an exercise in memoir, writing his story “starting with my grandparents,” lavishly illustrated in many media. “’Scrapbook’ is Jack’s personal archive,” says Ashley, “it’s his life in art, as curated by the artist.”

When Jack Whyte started his winter project last year, I don't think he ever thought it would generate the interest it has, let alone generate more than $14,000 from a Kickstarter campaign. The end product is "Scrapbook: a story of art" and it's a gorgeous 456-page, large-format hardcover book."

This was a family affair from start to finish, with Jack's son Dylon and daughter-in-law Ashley editing, proofreading and doing the work to make it available online. Because of their belief that art and culture should be accessible to everyone, they have made an online version available for free.

The hardcover version, however, brought them to Kickstarter to raise funds for that very expensive endeavour. The results were amazing. They reached their goal on time and then some, with 44 backers coming forward.

GORE BAY— In the August 19 edition of this paper, we reported on a Kickstarter online campaign that was ‘crowdfunding’ to produce a limited edition of an illustrated art memoir, entitled “Scrapbook: a story of art” by Gore Bay artist Jack Whyte. Designed by Jack’s son Dylon and daughter-in-law Ashley Whyte, who provided technical, editing and promotional expertise, the campaign to raise funds was a risk they felt was worth taking. The fact that ‘The Tragedy of the Asia,’ a previous book produced by Jack and Dylon Whyte is now on the Great Lakes Marine History curriculum of Bowling Green University in Ohio provided an added impetus.

With a deadline of September 7 to reach their goal of $14,000 to produce the 456-page “ Scrapbook ” in an edition of 100 copies, the nail-biting had started in earnest by the time they had their ‘ Scrapbook Party’ two days before.

to the sharing & preservation
of the free online edition of
Scrapbook: a story of art